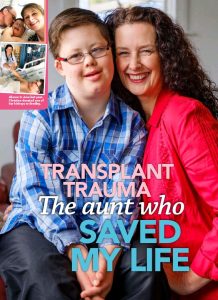 In June last year, Christine donated one of her kidneys to Bradley.

As far as impromptu gestures go, it was pretty huge.

Close families exchange gifts, but Sandra Whipp cannot even begin to think how to repay her sister-in-law Christine for saving her son Bradley’s life by donating a kidney.

“It’s just so humbling to think someone would do that for you, especially when they have their own children,” says Sandra. “She literally gave us another chance to be a proper family again.”

Sandra and her husband Brendon – Christine’s brother – are resilient, and have faced more life-changing news than most. They didn’t know Bradley, their first child, had Down syndrome when he was born.

“We had a couple of hours of normality, then we felt like our world had crumbled,” says the 51-year-old Dunedin teacher.

At the age of seven, Bradley was also diagnosed with Coeliac disease.

“Again, we thought, ‘Okay, it is what it is, what can we do to make this life better?’”

When, at age 12, Bradley started losing his appetite and wasn’t even interested in ice cream, his parents sought medical advice. Tests brought up no concerns but Bradley’s weight plummeted, so back to the doctor they went.

“It was a Thursday morning in June 2015. They told us he had stage 5 chronic renal failure and by the afternoon, we were deciding which of us would be going to Starship hospital with him. Our whole world just turned upside down again,” tells Sandra.

Brendon and Bradley were in Auckland for four weeks before Sandra and younger sibling Connor (10) could travel during the school holidays. Meanwhile, Bradley was on dialysis for 10 and a half hours every night.

Rachel Barrett from Kidney Kids National Manager Support Services was in regular contact with the family and was impressed with their fortitude.

“Being on a long transplant waiting list, and the worry of whether a suitable donor will be found, can be incredibly daunting, but as a family, the Whipps tried to give Bradley and Connor as normal a life as possible as they juggled life between Auckland and Dunedin, medical appointments and the limitations that came with Bradley’s medical needs.”

Sandra is grateful to have had their support. “We felt we were not alone. We could get on the phone and give them a call and ask questions – Mr Google can do it for you sometimes, but to have someone you know on the end of the phone is appreciated.”

At Starship, Brendon and Sandra were trained to administer the dialysis so they could return to Dunedin, and so began their life’s new normal of 10-plus hours of dialysis nightly while awaiting a suitable donor.

Bradley’s weight went down to 29kg and his dialysis meant he could have less than a litre of fluids a day, leaving Sandra fraught with worry.

Seeing the family cope as Bradley deteriorated compelled Christine (51) to offer to see if she was a suitable donor. “I watched all of them go into survival mode,” she says. “So I told my [adult] children I was interested in doing this. They were pretty relaxed, but they didn’t want to know too much.”

As incredible luck would have it, she was a match. In June last year, the approval came through and the Whipps and Christine flew to Auckland.

“Christine was already healthy,” says Sandra. “She was an amazing candidate. The day after the transplant, Bradley was sitting up in bed, eating an iceblock and watching a DVD. I just couldn’t believe it. I thought, ‘There’s our boy back, we have Brad back.’ He had an amazing recovery and was out of hospital in eight days, but had to stay in Auckland for another five weeks.”

Christine’s recuperation was expected to take longer – and did. “Within a month of the operation, I was off medication,” she recalls. “You come right pretty quick.

“It is awesome to see everyone so much happier and healthier; they have a life now. It is the most wonderful thing to have the honour to do this – to give someone the gift of life. I have no regrets.”

“Connor is so empathetic, kind, generous and patient with his brother and others,” says Sandra proudly. “This Mother’s Day, I am going to celebrate big time. I’m going to hug my kids like I have never hugged them before. I am just so grateful. They make getting out of bed every day worth it.”