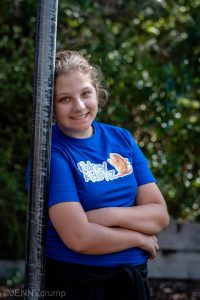 Natalie was 16-weeks pregnant when she discovered every new mum’s worst nightmare – her wish for a healthy baby wasn’t going to come true. Natalie was told the news her baby’s kidney was dilated and she was going to need close monitoring throughout the pregnancy.  And it didn’t stop there. Her daughter would need monitoring throughout her whole life and would likely face kidney issues.

It was at just three-years-old when Natalie’s daughter Georgia started weathering the difficult storm that is kidney disease. Georgia would vomit every twenty minutes and cry in pain, all day and all night, throughout the night. Natalie and her husband were by their daughter’s side to clean up and repeat.

With Georgia’s history of a dilated kidney, this sent trigger warnings for mum Natalie. This isn’t normal, something is really wrong. What followed was a harrowing three-year journey of little Georgia vomiting from the pain and endless hospital admissions.

Natalie felt no one was listening.  “There’s something wrong with her kidneys, it was diagnosed at birth and you’re not even looking at her kidneys. They kept saying it was her bowels. I said I’m not going home until you scan it.” Finally after multiple trips to the hospital and multiple scans later it was revealed Georgia had a blocked PUJ.

With the help of Kidney Kids, Georgia finally received her diagnosis of a blocked PUJ.  Just before her sixth birthday and weighing only 15kg, Georgia was booked in for surgery four weeks later.

The family felt a breath of fresh air with two years of remission. But the pain didn’t stop there. Georgie developed kidney stones which she still has to this day. From eight until thirteen she has struggled with the excruciating pain of recurrent kidney stones. The admissions to hospital have been endless where she has been told that it was not her kidney stones causing her pain. “Kidney Kids came to two meetings at the hospital when I was at my wit’s end and I couldn’t fight the fight anymore. They came along to support me and Georgia through that which was invaluable to be reaffirmed that I was doing the right thing for my daughter.”

Natalie says, “she missed out on a lot, especially through primary school. She really missed out socially because the girls didn’t bond with her because they didn’t know if she’d be there from one day to the next.”

“Her teacher gave her a report card that said Georgia would have done better had she been here more often! They just didn’t get what she was going through because despite it all, she didn’t look sick.”

This is where Kidney Kids camps really made a difference to the Pearson’s lives. Natalie burst into tears when Georgia said, “Mum, this is the first time I’ve felt like I’m not the sick kid.”

“Everybody’s sick, so it’s normal,” Georgia said. Georgia still looks forward to the camps today, at 13-years-old. Georgia also received the amazing opportunity to go on Dancing with the Stars with Kidney Kids ambassador Walter Neilands, along with two other kidney kids.

Kidney Kids has been a saviour for the Pearson’s family. Natalie describes the financial difficulties they’ve faced from a combination of petrol and time off work, as well as Starship Hospital parking fees and food prices.

For 13 years, Natalie and Georgia have been in and out of hospital, in hospital for up to two weeks at a time with Natalie having to drive back to the family home most days for her son who has cerebral palsy.

“Food in the hospital was really expensive, so to be given a voucher to go to Countdown makes a huge difference to be able to pick up a few things to survive.”

If it weren’t for the support of Kidney kids, Natalie wonders how long it would’ve taken for Georgia to be diagnosed – in the process, damaging her kidneys and threatening her life.

Natalie advises other families facing similar struggles to just keep asking the questions at your local medical service. Reach out to Kidney Kids. Reach out to other charities. The emotional and financial support has not only been life-changing but lifesaving.